While debate continues as to the effects of global warming on the winter resort industry, one element of winter weather has become clear since new owners took over China Peak in 2010: inconsistent snowfall.
Since the resort’s first season as the ‘New China Peak’, resort owners have seen five droughts, three near record snowfalls and one season that could be called ‘normal’.
As the resort looks to continue a series of major improvements over the coming years, the decision had to be made whether or not to spend several million dollars and invest in a snowmaking system that could for all practical purposes remove the risk of not having significant terrain and lifts open before the critical holiday beginning December 26.
After a successful campaign in 2018/19, Tim Cohee and his two Fresno based partners made the difficult call: invest in a major snowmaking system, large enough to open runs in a few days rather than weeks, and with adequate temperatures have most if not all lifts and major ski runs open for the Christmas holiday.
“If we look at the 61 year history of our resort, there has never been a nine year period with so many droughts as we’ve seen since 2010,” said resort Managing Partner and General Manager Tim Cohee, who has worked for resorts with some of the largest snowmaking systems in the nation - Snow Summit, Bear Mountain and Heavenly.
“We develop momentum with our guests, have a long season with many days of great skiing, get ready to further invest in improvements, and then get hit with the severe
droughts, as we saw in 2012, 2014, 2015 and 2018.”
“We are going from one of the smaller systems in California to among the top eight systems in terms of converting water to snow,” said Cohee. “It’s a monumental increase, probably six times more snow over any given period of time. In the past it might take eight or nine days to open runs such as Sundown Ridge, Dynamite or Kaiser. With this new system it can happen as quickly as a few nights.”
“The key to snowmaking capacity is water flow, how many gallons per minute you can push up the mountain through a system of water and air piping that covers major trails including Upper Dynamite, Middle to Lower Academy, Mainstream, Jack’s, China Bowl, Kaiser, Exhibition, Tamarack and the Terrain Park on Middle Tollhouse.
When we get a snowmaking window with temperatures and humidity in the 20s we need to be able to produce large amounts of snow in that narrow window.”
“We hope this new investment, the largest ever in one off season in the resort’s history, changes forever our ability to offer a consistent product between Thanksgiving and Christmas every season, regardless of natural snow.
Of course it would be great if Mother Nature delivers several feet early every winter and we never turn the system on, as it’s very expensive to operate, but we can no longer be in a position of wait and see. Providing consistent skiing from mid December, or earlier, well into April is key to our ability to continue making important improvements to this great resort,” said Cohee. 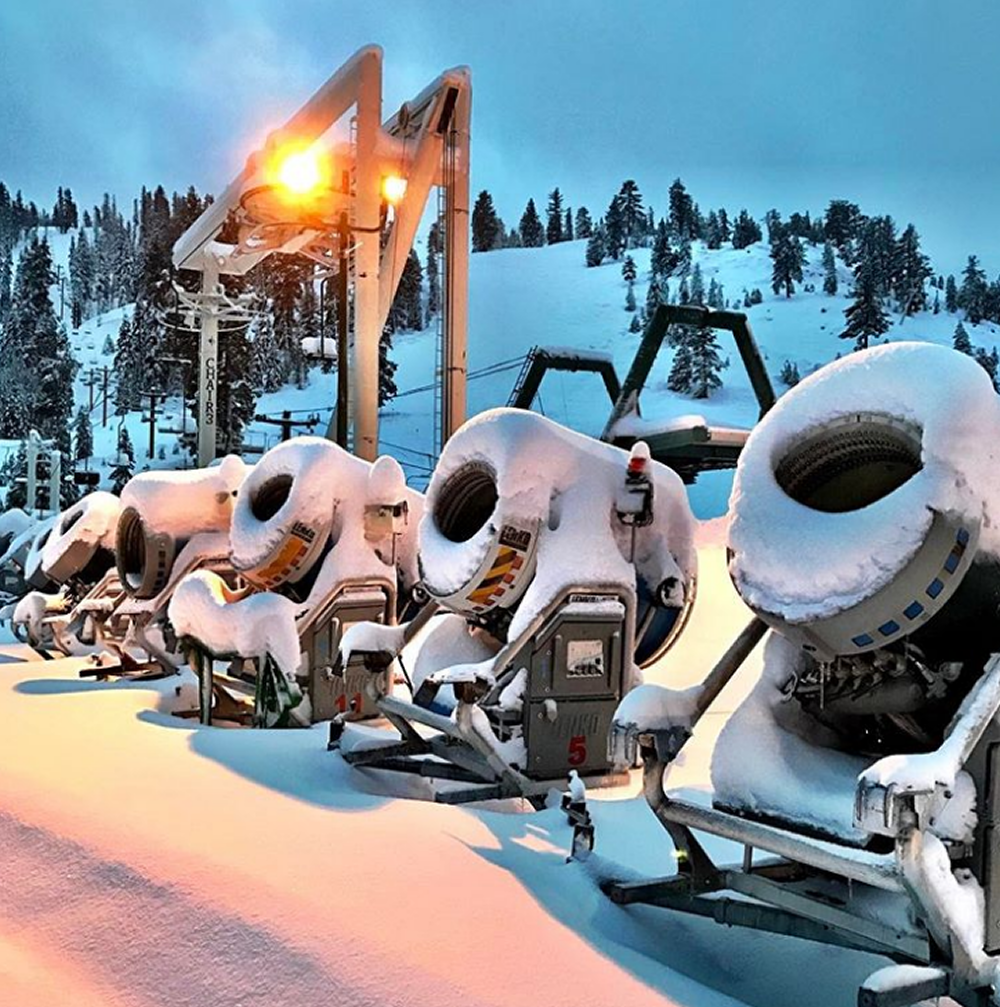 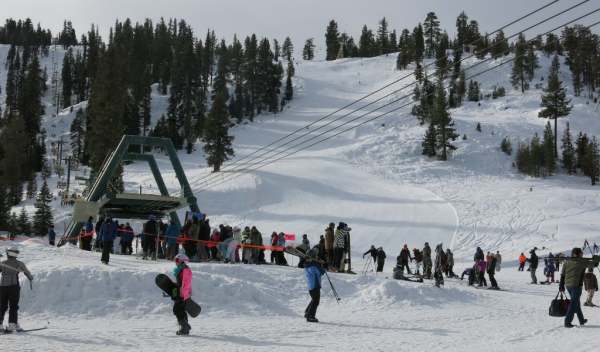 Covid 19 Precaution
(continued from page 1)
retail shops. When physical distancing is possible, such as hiking or biking on trails, guests may remove their face coverings.
By visiting China Peak Mountain Resort and China Peak Landing you voluntarily assume all risks related to exposure to COVID-19. 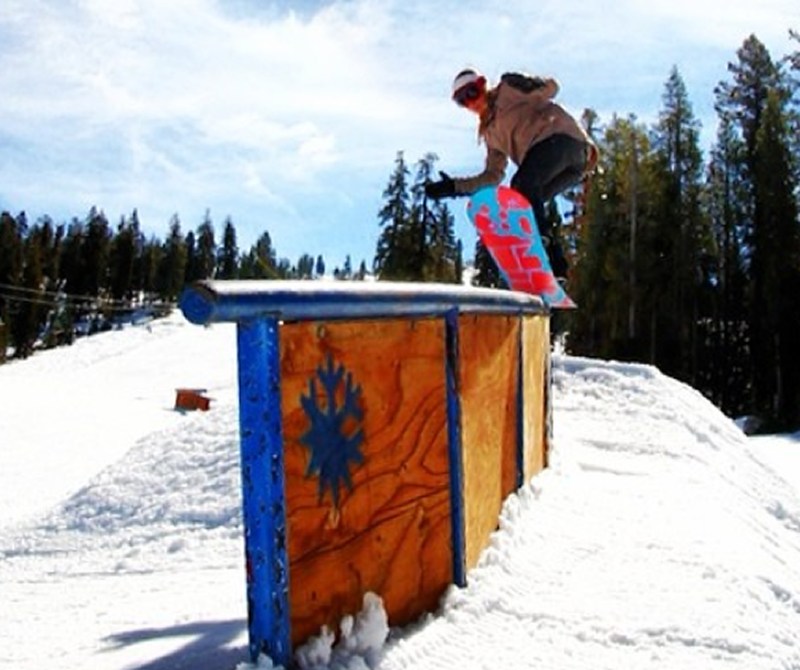 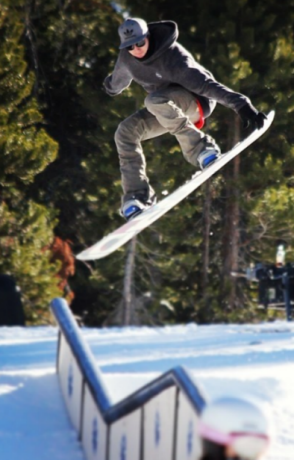 One challenge of a drought winter is the inability to produce a consistent and quality terrain park. An excellent quality park has always been highly desired by an avid group of local riders who have been disappointed by the quality and number of features on Middle Tollhouse these past several years.
Even when there was adequate natural snow to build a variety of jumps, the resort didn’t have the leadership in place to execute on a top level park. That should all be changing this winter.
“The lack of consistent snow, lack of staff and lack of a dedicated terrain park manager all led to our reputation for not paying enough attention to the park and it’s loyal following,” said Assistant Director of Mountain Operations and Manager of Snow Surfaces Paul Barile. “In the drought years we couldn’t afford to make enough snow in the park when we had ski runs we could not open.
With our new snowmaking system, a talented new park supervisor and a world class park consultant we are in the best position in years to provide a top shelf park.”
New leadership will come from the newest of Tim Cohee’s sons to join the resort’s team, Troy, who recently graduated from Sierra Nevada University in Lake Tahoe with a degree in business, concentrating on Ski Business and Resort Management. He was also a national caliber ski racer and is very familiar with quality parks, as he’s lived in the Lake Tahoe area his entire life. Nick Cohee was part of the resort’s management from 2016-2018 until he returned to a top level coaching opportunity at the Sugar Bowl Academy. Troy’s younger brother, Tristan, manages the Buckhorn Bar and J.W.’s Restaurant and Bar in the Inn at China Peak.
“It was clear to everyone involved we did not properly focus on the park, even when we had the snow,” said the younger Cohee, who is also part of the snowmaking/grooming team. “We committed this summer to repair over two dozen features so we had a great variety of boxes, rails and more to provide a park experience competitive with many of the state’s top parks.” In addition, China Peak added a world class park designer and builder to its team, Brandon Strong, who happens to be the nephew of one of China Peak’s Fresno based partners.
Now living in Truckee, California, Brandon was one of the top designers and builders for Snow Park Technologies (SPT) based in Verdi, Nevada, well known by anyone involved in terrain parks as the premier park builders in the world for nearly two decades. Virtually every major event featuring terrain parks, including the X Games and Olympics, were under the direction of SPT.
“Growing up in Fresno and riding Sierra Summit (previous resort name 1982-2010) for years, I’m very confident our new Terrain Park team can design and build parks to rival the best in Tahoe and Southern California,” said Strong. “I’ve been working with Troy all summer on features and design. As soon as weather permits we’ll roll out a series of exciting features, both man made and natural. The resort was known for great parks in the past, and we fully expect to bring back the excitement this winter.”
Another ‘insider’ to join the Terrain Park team this past summer was Blake Blackburn, who spent weeks working with Troy and Chad Sainsbury, Grooming Supervisor, on repairing old features and building new ones.